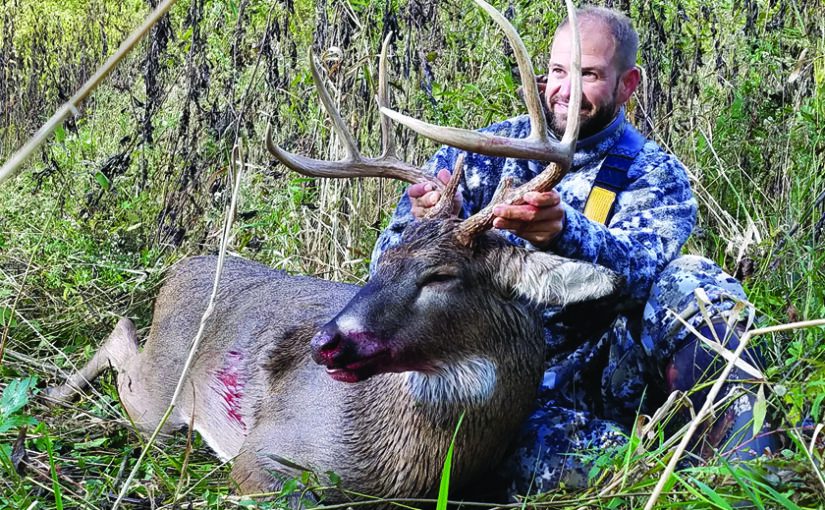 Stories have been passed amongst hunters that have rattled in big bucks.  When a hunter successfully rattles in a big buck the level of excitement is through the roof.  If the hunter happens to harvest the buck, the excitement can sometime be almost too much to handle.

Unfortunately, too many hunters don’t know how to effectively rattle, or they believe it is a technique reserved for South Texas.  The truth is, if there are deer in your area, they can be rattled in.  It might even be easier than you think.

Don’t get the wrong impression though and think it is easy.  If it was easy, hunters would be using it to harvest big bucks on every hunt.

It doesn’t take real antlers to rattle a buck in.  of course, real antlers are the most realistic sounding, but they can be cumbersome to tote around.  A better choice for some hunters would be one of the commercial devices that imitates a dominant buck fight.

Rattling bags, synthetic antlers and two-piece plastic systems that are designed to be twisted together might be more suitable for some hunters.  Quality imitators are made of materials that produce realistic sounds and can fool any buck.

Most rattling antlers are made from a pair of deer antler sheds.  Once you have a pair of sheds, simply drill a hole through the base of each antler.  Run a string through the holes to connect the two antlers.  Saw off the brow tines to save your knuckles and thumbs.  You now have what you need to rattle in a buck.

Too many whitetail hunters believe that rattling doesn’t work until just before the rut.  That is a myth.  Rattling works early in the season, too.  The difference is that bucks do not come in to protect their turf or to breed a doe like they do later in the season.  When a buck responds early ion the season it is because he is curious, or even looking for another buck to be friends with.

To add realism to your rattling use soft social buck vocalizations. The Hands-Free Grunter from Bossman Outdoors allows you to keep your hands free from the call while you are rattling or preparing for the shot. Use a subtle lure like a buck or doe urine.  Don’t use rutting scents yet.  The only thing you are trying to do is give the impression everything is OK if a buck does decide to scent-check the area from downwind.  Don’t be afraid to use a buck decoy with small antlers.  A decoy with big antlers is liable to spook off bucks before you can get a shot off.

When hunters think of two bucks fighting, they typically think of fights for breeding rights and to prove dominance between the two.  For hunters to successfully duplicate such a fight, they need to pay attention to a few details to increase their odds of it working.

One of the biggest obstacle’s hunters faces is having enough mature bucks on the property.  If there aren’t very many bucks, there will be little competition and no reason to check out a fight.  Simply put, when there are enough does to go around, bucks don’t need to fight over them.  When there are a lot of bucks looking for a few does, things can get intense between the bucks in a hurry.

If you want rattling to work all season long, timing must be almost perfect.  I have already explained early season tactics, but for rattling to work to its fullest potential the best times are right before breeding begins and then again right after.

Here in Illinois that would be about the last two weeks of October and then again, the last week of November through the first week of December.  Late in the season, follow the same tactics you used early in the season.

The first and last hours of the day tend to be the best early and late in the season.  Right before and after breeding, rattling is effective all day long.

If you have ever heard a real buck fight, you know there is no precise timeline as to how long it lasts or the sounds a buck makes at any given time.  Forget the sequence of events “experts” say happen during a fight.  Every fight has its own individual timeline.

It is common for bucks to circle downwind to scent-check the area to ease their mind of any potential threats.  There are a couple of tactics hunters can put into action to prevent from being busted by a mature buck in this scenario.

The first is to hunt using the buddy system.  To put the plan into motion, the primary hunter needs to be about 50-yards downwind of the person doing the rattling and calling.  This way, if the buck does circle downwind, he will likely present the hunter a shot.  However, there is no way to tell for sure exactly how the buck will respond so both hunters should be prepared to shoot if the need arises.

The second way to outwit a buck is to place an estrus does scent about 20 yards crosswind of either side of your stand.  As the buck circles, the goal is for him to catch a whiff of the doe scent before he is completely downwind of you.  In a perfect scenario, he will turn and head towards the scent before he is behind the hunter.  For added realism, use buck grunts, doe bleats or a combination of the two.

Consider adding decoys to your setup for added realism.  This will only add to the likelihood of success.  The best teacher on learning how to replicate a fight is to hear one for yourself.  Keep you ears open.  Rattling is just one way to coax a buck to within range.  You might spook some bucks off in the process, but you will also have chances you otherwise would not have.